Godfather of this Psilocybe cubensis strain is the American writer, teacher, researcher and psychonaut Terence McKenna. There is a rumor that this Psilocybe cubensis variety is even more potent than the popular and famous Copelandia cyanescens (also known as the “Hawaiian”). Its highly philosophical trip with a strong visual aspect makes it a treat for the more experienced psychonaut.

The Mckennaii magic mushroom strain is  probably named after Tercence McKenna. Although there are rumors that it’s not. The thing is that Terence didn’t come up with this strain. Some mycologist in The Netherlands might have given this (hybrid) cubensis strain the name McKennaii.

Most people see this as a tribute to the Master Psychonaut himself. But some see it as just a marketing trick. In the years past the Mckennaii Magic Mushroom proofed to be a different cubensis variation. Loved by a lot of it’s users for it’s strong trip and as a fast grower in a mushroom grow kit. 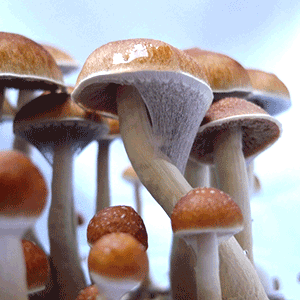 Terence McKenna was an American psychonaut, lecturer, and writer.

McKenna was and is noted for his knowledge, and the ability to articulate this knowledge, of the use of psychedelics, metaphysics, plant-based entheogens, and subjects ranging from shamanism, language, historical and civilizational timelines, the theoretical origins of human consciousness, and his concept of novelty theory.

The “Stoned ape” theory of Terrence McKenna suggest that the transformation or evolution from Homo Erectus to Homo Sapiens occur due Magic Mushrooms in the diet of the species.

Here is an photo of one of our McKennaii magic mushroom growkits. As you see the yield brings a lot of mushrooms. Without a doubt the McKennaii is one of the strongest cubensis variations in our Magic Mushroom Grow Kit catalog. This one is for the more visually interested. Dark brown caps with an odd shape and thick sturdy stems.

There are no reviews yet.

Be the first to review “Psilocybe Mckennaii” Cancel reply